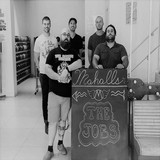 Primary songwriters Trevor Meyer, Thomas Heun, and Stephen DiBlasi all played in competing bands in high school spanning between Alt Rock, Ska, and Blues. Trevor and Tom started writing songs together after college, and in later years linked up with Steve to combine their efforts. Joined by bassist Marc Barone and drummer Jon Schlote; The Jobs musical space is primarily occupied in alternative rock with tinges of surf, punk, brit pop, and emo. Melodies are deliberate and songs are rooted in pop sensibility often masked underneath the gaze of guitar fuzz. Influences have greatly expanded over the years drawing from travel, world topography, landscapes, the sea, storytelling, loss and isolation, recuperation, and perseverance through physical and mental challenges. Packaging in a tonal influence that is governed by a love for the meeting of sonic and visual dynamics; The Jobs maintain their process-driven approach focused on flow rather than force. As the band’s musical cadence matures, the commitment to integral songwriting and love for innovation balance the challenges of sailing upon the ever-changing modern day musical landscape and beyond.