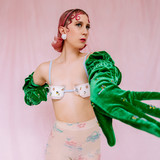 „There’s only one good thing about a small town, you know that you want to get out“. This is exactly what FLOSS felt in her teenage years while dreaming up show looks and listening to pop music, long before she knew Lou Reed's line. Breaking out from the small town where no one famous ever came from, equipped with a childlike curiosity and the wish for artistic expression, she moved on to London, Hamburg, Los Angeles and Paris. Since 2018, she lives in Berlin. Pop culture has always fascinated the 28-year-old. That’s why she explored the fashion scene to be a part of the world that she is so fascinated by. When she worked for the „King of Fashion, Art and Rock’n’Roll“, Jean-Charles de Castelbajac, he would play her Yazoo, Kraftwerk and Lou Reed – a new world of music opened up for FLOSS. One day, JCDC told her: „You should be a performer“. Indeed. After moving to Berlin, FLOSS released the self-love Christmas track Earth to Santa (I Am My Own Gift) to raise organ donation awareness with Junge Helden eV. Joko Winterscheidt starred in the video and the „song finds its way directly into your ear and heart“ (Tres-Click.com). Inspired by girl power, the 80s and 2000s, she adds her her very own sprinkles on top of pop music. FLOSS debut EP is set to be released this summer.