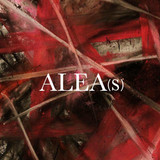 Cathartic, dense, and immersive is the audiovisual experience that ALEA(s) have been proposing since their conception in 2015. The Brussels based group is composed of FSTN behind the illustrations that are brought to life by Boris Wilmot’s work as graphic motion designer and then enveloped in Shakmat’s twisted world of electronic music. The trio strike a stylistic balance in rhythm and deconstruction presented in the form of a live performance that has seen venues in Berlin, Paris, Brussels, and Montreal. Between Shakmat incessantly thumbing through parameters on his modular synthesizer and FSTN frantically digging, erasing, sometimes tearing into his paper brought together by Boris’s intense and cohesive visual sequencing, the three together make for as much of a performance in their process as their product. The group’s proposed aesthetic comes off as obscure and imposing, but pummeling nonetheless which is expressed through the physicality of its creators and their audience. With a string of international bookings already under their belt, ALEA(s) is only getting started.