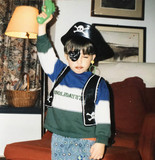 Holiday87 is a solo project by Benjamin Ruttner, the recording artist [1/2 of The Knocks], songwriter/producer, and record label boss [HeavyRoc Music and Black Clay]. Ruttner ideated the concept for the album while spending time in upstate New York during quarantine. Growing up making music by himself on a 6 track cassette recorder in rural New Hampshire, his return to the woods during the global pandemic sparked a creative pull towards returning to his roots.

As a teenager, he would make sample based/beat DJ music, inspired by artists like DJ Shadow, The Avalanches, Moby, Gorillaz, Dan The Automator & Fatboy Slim. Ruttner would work on his music at his home [which was located down a dead-end dirt road] and then sell the cassette tapes to people at his high school and at the local record shop. Eventually, this led to the creation of Holiday87, a self-titled electronica album that twists and turns with influences from the past and present and a deep appreciation in particular for rare soul and doo wop samples.