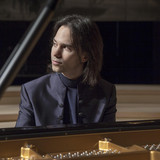 Horacio Lavandera is a pianist with a wide range of interests. This includes not only performing the standard solo and concerto repertoire, but also 20th century music, electro-acoustic music, and works by Argentinian composers. Lavandera studied the music of Beethoven with both Maurizio Pollini and Charles Rosen. As the century turned, he began winning competitions and performing with well-known orchestras and conductors in the Americas and Europe. Lavandera released his first recording, appropriately entitled Debut, in 2001. Imágenes, featuring the music of Dino Saluzzi and released in 2015, was his ninth recording, but his first on a major-label's primary imprint. His first concert featuring him as both soloist and conductor took place in 2009. In the 2010s, he also began composing, using his interest in science to influence his compositional techniques.