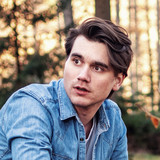 Growing up listening to the classic rock tapes and CDs of his family, Fabian developed a feel for everything bluesy quite early in life. To this day, his guitar playing and music is influenced by artists such as B.B. King, Eric Clapton, Stevie Ray Vaughan and more. His passion for the guitar developed in his early teens; after picking up his dad's dusty nylon string guitar, he became fascinated. The first bands and gigs followed promptly and soon, he was hooked. Fast forward to young adulthood. In what seemed like a logical step on the path to becoming a musician, Fabian enrolled in the International Music College Freiburg, Germany, just to discover that the passion for music quickly faded under academic pressure. A few years down the line, Fabian found back to his creative outlet. Now, his music is written and performed because of a desire to create, instead of an academic or financial need. Still strongly influenced by his early idols, he added a lot more genres and influences to his portfolio. Influences ranging from John Mayer or Tommy Emmanuel to Ariel Posen and The Bros. Landreth, his music now incorporates mainly blues, rock, pop and soul into a tasteful, modern sound. With the single

Call Me To You, the Luxembourg & Germany based singer-songwriter released the first song of a 2+ year long writing and production journey in early 2020.