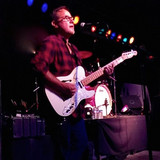 The Bottle Kids is a side project of Singer/Songwriter Guitarist Eric Blakely. It was a dream of his as a young artist to record an album playing all the instruments himself since learning that McCartney and Stevie wonder had played most if not all the instruments on certain albums. Blakely cut his teeth in the late 70’s early 80’s in the San Francisco Bay Area Rock scene. Local heroes the Rubinoos were a huge influence on the impressionable young aspiring artist. The Keystone Berkeley nightclub, now sadly gone was a goldmine of great shows that left a big impression on Blakely. The Knack, The Plimsouls, Dwight Twilley, The Rubinoos and

Bram Tchaikovsky all passed through the gates of The Keystone. It was an exciting time. Punk had just started to merge with Pop Rock and the result was Power Pop. A genre that only enjoyed a brief period as a genuine category. Many bands that followed have been heavily influenced by the genre. Fountains Of Wayne, Pop Punk Heros Green Day and The Donnas to name a few. After recording and touring with Paul Collins’ whose first album is considered a Power Pop classic Blakely realized it was time to tap back into that well of inspiration and write and record an album inspired by his youth. What started off as a one off ending up becoming two albums, Such A Thrill and Let Me In On This Action. Blakely continues to release music under his own name and is considering a possible third album.