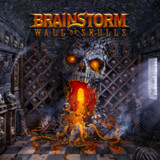 Listening to the latest Brainstorm album ‘Wall Of Skulls’, you immediately realise how much the band surrounding vocalist Andy B. Franck has benefitted from the group’s impressive predecessor offering, ‘Midnight Ghost’ (2018). ‘Midnight Ghost’ was a musical turning point for the power metal act from southern Germany which saw the band members reach an even higher level of quality and broaden their artistic horizon even further. We simply worked on the songs without compromises and never changed course once we’d embarked on a specific direction. So ‘Walls Of Skulls’ is definitely not ‘Midnight Ghost 2.0’, but another and very obvious step in the evolution of our music.” Wall Of Skulls’ sees Brainstorm pull out all the stops, guitarists Torsten Ihlenfeld and Milan Loncaric stringing together one strong guitar riff after the other, giving the rhythm section consisting of bassist Antonio Ieva and drummer Dieter Bernert free rein and allowing them to lay down the red carpet for some awesome melodies and anthemnic chorus parts. ‘Wall Of Skulls’ is scheduled for release on 20 August 2021, with another cover courtesy of Hungarian artist Gyula Havancsak (Accept, Stratovarius) featuring an amazing design which is the perfect companion to one of the strongest Brainstorm albums to date. Andy B. Franck is happy to confirm this positive impression: “I’ve never felt more comfortable in my role with Brainstorm!”