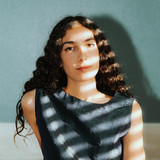 Bedouine, a gallicized riff on bedouin, the nomad, the wanderer. Anyone can assume such a name, but Azniv Korkejian has an experience of what it means, the type of ground it covers. “Moving around so much caused me at some point to feel displaced, to not really belong anywhere and I thought that was a good title.” Born in Aleppo, Syria to Armenian parents, Korkejian spent her childhood in Saudi Arabia, moving to America when her family won a Green Card lottery. They settled in Boston, then Houston, but she split for L.A. as soon as she could. A casual offer to stay on a horse farm took her to the rolling hills of Lexington, Kentucky, followed by a year in Austin, and a trip east to Savannah for a degree in sound design. Returning to L.A., she discovered a close-knit community of musicians in Echo Park that started to feel like home. Bedouine has a sound. Sixties folk meets seventies country-funk with a glimmer of bossa nova cool. Lithe guitar picking and precise lyrical excursions. That mesmerizing voice and phrasing. Working on around thirty tracks over three years, with contributions from a remarkable cast of players like guitarist Smokey Hormel, Gus Seyffert and Korkejian brought a selection of ten songs to Richmond, VA. She specifically sought out Spacebomb, approaching Matthew E. White after a show in L.A. He remembers listening to the song she sent over and over, on and off the road, “‘One of These Days’ became our alarm when we woke up for almost all of that tour.”