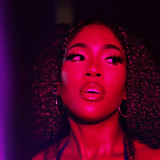 Part of a class that includes the likes of Stacy Barthe and Eric Bellinger, Sevyn Streeter is a contemporary R&B artist who achieved success during the 2010s as a writer for other artists while releasing wider-scoped solo projects. After building a reputation on songs for such names as Alicia Keys and Ariana Grande, she had an R&B hit of her own with 2013's "It Won't Stop" featuring Chris Brown. Streeter presented her full-length solo debut, Girl Disrupted, in 2017.

Previously known mononymously (as Ambee, Se7en, and Sevyn), native Floridian Amber Denise Streeter entered the music industry as the first member of TG4, a pop-R&B outfit put together by Chris Stokes (Immature, B2K). In 2002, the group released a single, "Virginity," that reached number 88 on Billboard's Hot R&B/Hip-Hop Singles & Tracks chart. An album was recorded and shelved, and the group split. Streeter caught the attention of producer Rich Harrison (Amerie, Beyoncé), who asked her to join RichGirl, yet another group that released one minor hit ("24's") and recorded a shelved album. Streeter subsequently established herself as a songwriter for Chris Brown (including "Yeah 3X," "Wet the Bed," and "Strip"), Kelly Rowland ("Keep It Between Us"), Brandy ("Slower"), and Alicia Keys ("New Day" and "Limitedless"). Signed to major-label Atlantic as a solo artist, Streeter released her first single, "I Like It," in October 2012. She had a bit of a breakout in the next year. "The Way," a song she co-wrote for Ariana Grande, hit the Top Ten of the Billboard 100, and her own "It Won't Stop" reached the R&B/hip-hop Top Ten, peaked at number 30 on the Hot 100, and eventually went gold. Call Me Crazy, But..., an EP appropriately seven tracks in length -- with "I Like It" and "It Won't Stop" included -- was issued that December and went to the Billboard 200's Top 30. Over the next few years, Streeter continued to work with the likes of Brown and Rowland but was more active as a headliner. Numerous singles and another EP, Shoulda Been There, Pt. 1, preceded the album Girl Disrupted, released on Atlantic in 2017. It cracked the top half of the U.S. album chart, peaking at number 92. She sampled the Gap Band's "Yearning for Your Love" on 2018's "Yernin" before issuing songs including 2020's "HMU" from her second album, Drunken Wordz x Sober Thoughtz. ~ Andy Kellman, Rovi