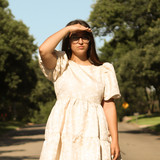 Texas based singer-songwriter, Layne Elizabeth, released her debut album, produced by Jake Scott when she was still in high school. The 12-song collection sends listeners on an introspective lyrical journey with mood boosting, inspirational anthems like The Ride and pensive, heart wrenching ballads like Empty and Where the World Ends. Since then, Layne has penned hundreds of new songs. She recently discovered a love for producing and continues to release new music on a regular basis. Her recent single, Forever Family, was featured on the soundtrack to the Netflix movie, 7 Yards. Forever Family (From the Soundtrack to 7 Yards: The Chris Norton Story) Be sure to follow along on TikTok @itslayneelizabethyo where Layne gets her followers’ perspectives on new songs she is writing or on Instagram @layneelizabethmusic for a behind the scenes look at what’s happening in her life.