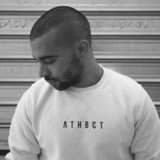 Oxynous, real name Nikolas Ntalis, was born & raised in Santorini, Greece. He felt connected with Rap Music at the age of 15 and began to experiment on the mic soon after. 4 Years later, at the age of 19, he was inducted into the family of Bashment Records, to which he remains up until the present day. Being one of the label's very early members, he has shared numerous stages throughout Greece with other artists from the clan, studying and perfecting the craft. This fed him with the confidence to finally release his own music, so here we are. Plenty of bars coming from Oxynous. Watch this space.