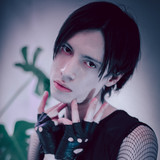 Sasha Darko is a Russian artist, music producer, game developer, photographer, director and writer from Ozersk, a city labeled by Vice as “Radioactive City Russia Doesn’t Want You to Know About.” Being a multi-genre musician and performer, since 2007 he had produced 200+ experimental music solo releases using many aliases (such as EARTH INCUBATOR / HEADLESS KAMIKAZE), also collaborating with such diverse artists as Kenji Siratori, Hiroshi Hasegawa, GX Jupitter-Larsen, Komissar Hjuler / Mama Baer, Alexei Borisov and TLASILA (Tom Smith + Thurston Moore + Don Fleming). The albums were published by underground labels all over the world, from Japan and US to French Polynesia and Columbia, using all possible media formats: cassettes, CDs, CD-Rs, 7″ vinyl records, floppy disks and business cards. In June 2018 he was resurrected and came back with the release of GENESIS, an album which introduced “witchdrive” – a new kind of sound which could be described as a mix of witch house and YM2612 chiptune music. It was praised by people and press, appearing twice on radio show of Mike Textbeak, one of the witch house pioneers. He then moved to hip-hop scene and released multiple mixtapes and singles, including a conceptual grim neoclassical hip-hop EP “A Field Where I Died” where every track presented a different life of an album protagonist through a span of ten centuries.