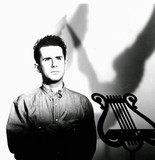 Frontman for British pop phenomenon Frankie Goes to Hollywood, singer Holly Johnson born in Liverpool; in 1977 he joined the short-lived Big in Japan , and after issuing solo singles, "Yankee Rose" and "Hobo Joe," he created conceptual band Frankie Goes to Hollywood as a vehicle in 1980. They rose to superstardom on the strength of the singles "Relax," "Two Tribes," and "The Power of Love." Their #1 UK 1984 debut, Welcome to the Pleasuredome, was also well-received by the press, ; after a less successful 1986 effort , Liverpool, Holly Johnson left and spent the next several years locked in a court battle against label ZTT, winning his artistic freedom , the first artist to do so ; he returned to music in 1989 with his solo debut Blast, which topped the U.K. charts and turned Platinum. Dreams That Money Can't Buy followed two years later after the Remix album HOLLELUJAH . In October 1991 the openly homosexual singer discovered he'd contracted HIV, a subject frankly detailed in his 1994 autobiography A Bone in My Flute. Also a successful painter, in 1996 Johnson exhibited his work in London; forming his own record label, Pleasuredome, in 1999 he issued his third LP, Soulstream. Fifteen years later, the single "Follow Your Heart" remixed by Frankie Knuckles and Eric Kupper (and later legend Tom Moulton) arrived along with the full-length LP Europa. The album and accompanying tour marked 30 years since the release of Frankie's Welcome to the Pleasuredome.