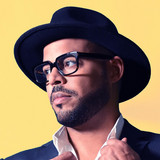 Gabriel Urgell Reyes is an award-winning French-Cuban pianist, composer, artistic director and producer based in Versailles, France. Known for his boundary-breaking, cross-disciplinary compositions that blend styles such as contemporary classical, experimental and jazz with Afro-Cuban rhythms, Gabriel’s bold creative dynamism and intercultural musical eclecticism are redefining traditional images of a classical musician and modernising the archaic, stagnant genre in line with the diverse, global values of the 21st century. The visionary composer first made history at age 25 when, shortly after graduating, he was appointed soloist of the Havana Philharmonic Orchestra and was made a Professor at Cuba’s University of Arts (ISA). Gabriel’s technical, expressive, and impressive mastery of piano - underscored by his contemporary virtuosity and instinct for innovation - has dazzled global audiences ever since. From Paris to Beijing, Gabriel has made his mark as a pianist and chamber musician at festivals and concert halls worldwide. His album Metaphor of Silence was nominated in the "Album Eclectic" and "Music Producer" categories at the 17th Annual Independent Music Awards in New York City (2019), and he’s also earned a sweep of prestigious awards and nominations throughout his career (Diapason d’Or, Blüthner laureate, 4 Stars Classica and Qobuzissime, to name a few). Make sure you follow Gabriel Urgell Reyes - he is musical history in the making.