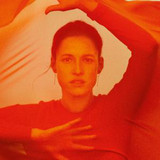 Carminho is a Portuguese fado and popular singer. Born Carmo Rebelo de Andrade and hailing from Lisbon, she is the daughter of renowned fadista Teresa Siqueira. She cites influences who include fado legends Lucília do Carmo, Fernando Maurício, and Amália Rodrigues, as well as pop/rock legends Queen and the Beatles. Carminho made her recording debut in 2003 on Saudades do Fado: Tertúlia de Fado Tradicional, a collaborative album produced by guitarist Luís Penedo on which she is featured as a vocalist. Critically acclaimed, she won the Prémio Amália Revelação award in 2005 and was later featured prominently in the Carlos Saura film Fados (2007). She made her solo album debut in 2009 with Fado produced by Diogo Clemente; it hit the Portuguese charts and remained on its top rungs for most of the year. Two full years later, the album was released across Europe, resulting in it being named album of the year by the British world music magazine Songlines. That same year she participated in two hit collaborations: with Pablo Alborán on "Perdonáme" -- a hit in Spain and Portugal -- and with Pedro Luís on "Lusa." Her 2012 album Alma featured duets with Chico Buarque ("Carolina"), Milton Nascimento ("Cais"), and Nana Caymmi ("Contrato de Separação"), allowing the singer to tour beyond the confines of Portugal to Brazil and Spain. In 2014, she moved to Warner for Canto, a collection of traditional and new songs. One of its most popular tracks was "Chuva no Mar," composed by Brazilian singer/songwriter Marisa Monte, who also performed with Carminho in duet. Carminho toured most of Europe in support and performed on television in several nations. She followed the album with Canta Tom Jobim, a collection of the bossa master's tunes performed by the singer with the composer's own band. She was invited to record the material by Jobim's family. In true Carminho fashion, she enlisted some of his most innovative interpreters, including Monte, Buarque, and Maria Bethânia. Issued at the tail-end of 2016, the album placed on charts from Portugal and Brazil to Spain, France, and even Japan. The subsequent tour sold out virtually every date. Later in 2017, she was invited by Monte, Carlinhos Brown and Arnaldo Antunes to participate in the sessions for the second self-titled Tribalistas album, which was released in August. ~ Jason Birchmeier, Rovi