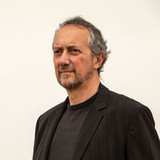 Giuseppe Bruno graduated with honors in Piano, Composition and Conducting with Professors Specchi, Zangelmi and Taverna. He also studied piano with Paolo Bordoni, conducting with Leopold Hager and attended a seminar in composition at the IRCAM in Paris. Performing for several years as a pianist in many different chamber ensembles and as a brilliant soloist, Bruno has played with many important orchestras throughout the world and conducted prestigious ensembles such as Archi della Scala, Orchestra della Toscana, Ukraine National Orchestra, Sarajevo Philharmonic. He has collaborated with great conductors, singers, instrumentalists, and participated in the “Festival of Two Worlds” in Spoleto, Italy, and Charleston, South Carolina. Maestro Bruno was a prize winner at the International Piano Contest in Rome in 1991 and also in 1992 at the “Viotti” competition in Vercelli, Italy, in a duo with violinist Alberto Bologni. He has recorded for OnClassical, Da Vinci, Sheva and others, as well as for RAI, Swiss radio, Vatican radio and for WDR. In 2018 he has conducted the Italian Première of Liszt’s forgotten opera “Sardanapalo” at the Lerici Music Festival. His compositions were performed in Italy, China, USA, France, Germany and recorded by violinist Alberto Bologni and saxophonist Valentina Renesto, his transcription of Mahler's “Purgatorio”

was published by Universal Edition Wien. Giuseppe is currently Director of the “Giacomo Puccini” Conservatoire in La Spezia.