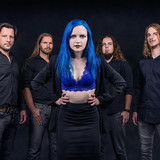 Beyond God is a female fronted symphonic metal band from The Netherlands. Their music incorporates elements from heavy metal, classical and symphonic music. Heavy guitars, bass and drums are combined with symphonic strings, brass ensembles and beautiful vocals to create dark, atmospheric compositions. Beyond God as you experience it right now has Meryl Foreman on vocals, Peter den Bakker on guitars, Dennis Winkel on bass and founder Ferry Guns on drums/piano/orchestrations. In 2016 they released their first full-length album called ‘A Moment Of Black’ and toured successfully in multiple countries, gaining fans all over the world.

Since the release of the debut album, the journey of the second began. They wanted to grow in their sound, making it more modern metal with aggressive riffs and a dynamic rhythm section. This all combined with the atmospheric, dark orchestral vibe and melodic vocal lines that characterize Beyond God, results in an amazing sound. On the 9th of November 2017, the second album called ‘Dying To Feel Alive’ was released! Many positive reviews, shows and a European tour followed! For 2019 they embarked on a journey for a new special release... an acoustic album! This album took a look back at many songs from the first two albums and more. Currently, Beyond God is working hard on their third full-length metal album, which will elevate their music and give you even more metal! Be prepared!