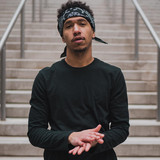 Pat Clifton is a Canadian songwriter, producer, and musician who makes sense of the world through intimate, sometimes unapologetic, storytelling. Pairing well with a distinct voice and layered lyrics, Clifton often makes use of the piano to reinforce his craft. His songwriting began with poetry before he started writing rhymes, and he quickly found his rhythm in the world of hip-hop. On his 2017 project, ​Everybody’s Still Asleep​, Clifton collaborated with fellow Canadian music producer Blüme to create a collection of songs that don’t shy away from the ugly, yet the sometimes wonderful truth that is the human experience. Pat Clifton and Blüme continued to work together through their ambitious #12for18​ ​project, releasing a song each month for all of 2018. Returning to form in 2020, Clifton starts the year off with Rosary (releasing January 15th); spending an evening with the Devil personified, Luci, while attempting to balance the temptation of sin with the need for a little redemption.