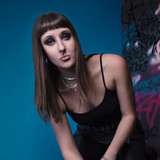 Montreal born, based in Toronto Melotika is redefining what it is to be an Electropop artist. With a New Retro sound, off-putting lyrics and a distinctive lower register, Melotika unabashedly draws upon her personal life experiences. Fearlessly she embraces individuality calling on others to discover the beauty and confidence within themselves. Her follow up single after Crazy and Dancing Without You, Tangled Hearts has a Bubble Gum Pop sound that reminds us of youth, turbulent love and femininity. Melotika takes on a new school approach with her iconic New Retro sound influenced by 90's and early 2000's music. Melotika made her first appearance showcasing her sultry mystifying vocals on Krosst Out's single I Don't Care (feat. Mel Yelle) in 2017. She released her first single Unaware, Pt. II (Blindside) in 2018 followed by the experimental debut Album Unaware. Most notably, her eccentric music videos reveal all of her quirky persona's while expressing cliché concepts and emotions often expressed through pop culture. After receiving support from Amplified Radio Network's TMS Underground and featured on stations such as 105.9FM The Region, 102.7FM CILU, and 106.9FM CIXX, Melotika grows her fan base online called 'The Rebelz'. Melotika is in the process of releasing her EP 'Dancing Without You.' Each single expresses true turbulent emotions Melotika felt in her late teens, early 20's, and what brought her into making music.