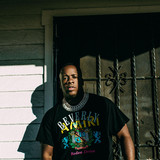 Yo Gotti is one of the few rappers who has achieved mainstream success after many years of underground activity and has maintained it for well over a decade. Ten years after the North Memphis native debuted on cassette, he first touched the Top Ten of Billboard's R&B/Hip-Hop Albums chart with Back 2 da Basics (2006), and has since strung together Top Ten pop entries including I Am (2013), The Art of Hustle (2016), I Still Am (2017), and Untrapped (2020). While no one would classify the gruff street hustler as a pop-rapper, Gotti has often achieved gold and platinum status, counting "Down in the DM," the number eight Hot 100 hit "Rake It Up," and "Put a Date on It" among his biggest RIAA-certified singles. Originally known as Lil Yo, Yo Gotti (born Mario Mims) made a name for himself during the '90s when he was a teenager. Performing in and around Memphis with support from Kingpin Skinny Pimp and DJ Sound, he also issued the tape Youngsta's on a Come Up, and in 1999 moved forward with his first album as Yo Gotti, From da Dope Game 2 da Rap Game, issued on his Inevitable Entertainment label. Gotti continued to expand the Inevitable catalog and struck a nationwide distribution deal with TVT, which enabled him to hit Billboard's R&B/hip-hop chart for the first time with 2003's Life, an album boasting appearances from Lil Jon and Lil' Flip. After having his track "Full Time" featured in the Memphis-based film Hustle & Flow, Gotti hit the Top Ten of the R&B/hip-hop chart in 2006 with Back 2 da Basics. A series of Cocaine Muzik mixtapes, along with the gold singles "5 Star" and "Women Lie, Men Lie" (featuring Lil Wayne) carried the rapper into the early 2010s. A couple major-label deals resulted in greater commercial success during the rest of the 2010s and into the 2020s. Live from the Kitchen, Gotti's second straight Top Ten R&B/hip-hop album -- also a number 12 entry on the Billboard 200 -- landed on RCA in 2012. Gotti then settled with Epic and put together several consecutive Top Ten Billboard 200 albums. This began in 2013 with I Am, highlighted by the gold singles "Act Right" and "I Know," and continued through the end of the decade with 2016's The Art of Hustle and 2017's I Still Am, the former of which also topped the R&B/hip-hop chart. These two LPs included the double-platinum "Down in the DM," the gold "Law," and the triple-platinum Top Ten pop hit "Rake It Up" among their triumphs. During this hot period, Gotti also issued supplemental mixtapes -- such as the high-performing White Friday (CM9), another Cocaine Muzik installment -- and scored one of his biggest hits as a featured artist with Kanye West's "Champions." In 2019, Gotti notched another platinum smash when he and Lil Baby teamed up for "Put a Date on It." The track was included on his fourth consecutive Top Ten album, 2020's Untrapped. ~ Alex Henderson & Andy Kellman, Rovi