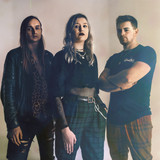 Founded at the beginning of 2020, Jagged Tooth formed in Brighton and after just one jam session felt they were onto something pretty exciting. However, several weeks into writing their first EP Coronavirus hit and the world closed down. But the Pandemic didn't stop this trio, and they continued to write and record their first EP during lockdown. Fuelled by the anger, sadness and frustrations that were being broadcasted across the globe, Jagged Tooth's sound was born. Led by Bex's raw, powerful vocal and bass lines, accompanied by Brody's inventive beats and James' catchy riffs, the trio have created a truly unique and fresh sound to bring to the rock scene. Having all been in bands before, the group felt they wanted to try writing music about something different, something more personal than sex, drugs and rock n' roll. They quickly figured that they wanted their music to act as a mirror reflecting some of the uglier and taboo things that were going on in their worlds. Their first EP discusses topics such as sexual assault, abusive relationships, mental health and politics. Inspired by bands such as Badflower, Royal Blood, Marmozets and Alter Bridge, Jagged Tooth bring a modern and raw rock sound which not only speaks to their own experiences, but helps tell the stories of those who don't feel they are able to do so.