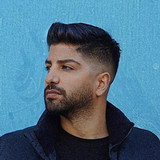 Xaniar Khosravi is a well-known Pop/Hip Hop/R&B Singer and Songwriter based in Iran. He started his career by writing songs. After gaining recognition as a songwriter, he began arranging and songwriting with his brother Sirvan Khosravi (also a prominent Pop/Rock star in Iran). It was at this point that he decided to start a career as a singer. He released hit songs such as Tafre Naro and Risk. What set him apart was his new approach to songwriting. His music sounded fresh and quite different from most of the work released at the time. Among his many accomplishments are co-writing Sirvan Khosravi’s hit songs, Ghabe Akse Khali, and Na, Naro and writing Sirvan’s massive hit Doost Daram Zendegiro (I Love Life). He also started the band ‘Ehaam’ which has a different style than Xaniar’s music.