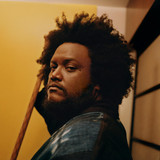 Washington went on to study ethnomusicology at UCLA and play with Snoop Dogg, Raphael Saadiq and more. His debut album, The Epic, was released in 2015 to rapturous critical reception, universally embraced as one of the best of the year and awarded the inaugural American Music Prize. His highly anticipated second album, Heaven and Earth, will be released in June 2018 and is set to build on the success of The Epic as well as Washington’s acclaimed 2017 Harmony of Difference EP.