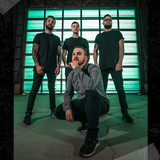 Wildfire, Feels Like Home’s newest single is nothing less than impactful and aggressive. Fast and heavy, this song is dedicated to all the ‘Metal’ and ‘Hardcore’ fans out there. This song also sends a warning and distress message to the self-destructive human race. A little different than the previous album released by the band in 2019, Wildfire sets the tone for their new material coming shortly. Instantaneously, with the first word ‘OUTBREAK’, you will be hooked and flooded by the mood and evolution of the song, which results to the end of the world.   Feels Like Home is a Metalcore band from Quebec. The band is known for their unique blend of crushing and powerful elements of hardcore combined with the catchy and melodic elements of their metal roots. This effective blend of styles along with their monstrous presence onstage has earned them their spot at the front of Quebec’s alternative music scene.