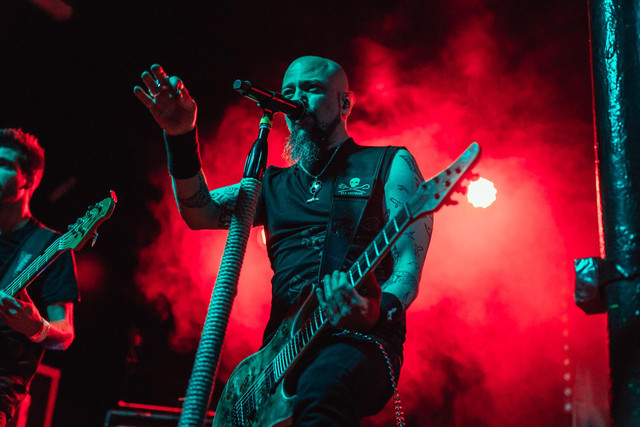 Formed in 2011 and named after a psycho-physical law (S=KlogR) of the 19th century, KLOGR have so far put out three studio albums, two EPs and countless videoclips. Their last album "Keystone" was produced by the Canadian three times Grammy Awards winner David Bottrill (Peter Gabriel, Kid Rock, Smashing Pumpkins, Tool to name a few): “We decided to work with a producer like David to reach a turning point in our discography” comments Rusty, “David brought something that was missing in the band, an outside view focused on music and not on what is 'trendy'”. KLOGR lyrics are deeply infused with philosophical and strongly environmentally conscious messages. The band is officially supporting, since 2013, the non profit marine conservation organization Sea Shepherd along with artists such as Red Hot Chili Peppers, Gojira and Architects. As a live act, KLOGR never stopped touring and conquering international stages supporting bands like Prong, The Rasmus, Butcher Babies and Limp Bizkit. The uncontrollable power running KLOGR shows is coming back again in the beginning of 2019 on occasion of a European Tour with Buckcherry. Concerts