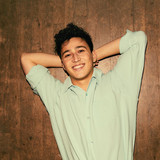 Zak Abel is a British singer/songwriter who rose to fame after supplying guest vocals on Gorgon City's U.K. Top 20 hit Unmissable. Born in March 1995, Abel had originally set his sights on becoming a table tennis champion -- he had already won the English Cadet Boys' singles title in 2009 -- but after moving to France to go semi-pro, he realized that the repetitive nature of training wasn't for him. Abel already had a love for music and had been writing and playing piano from a young age; he decided to upload videos of himself performing and in 2012 he signed a deal with . His first release came singing vocals on Gorgon City's 2014 single Unmissable and a year later, he teamed up with Bristol-based producer Joker to deliver his first full EP, Joker Presents. Abel followed the release with the EPs Don't Belong and One Hand on the Future. Blending soulful vocals with R&B and pop, Abel returned in 2016 with the singles "Everybody Needs Love" and "Unstable," while also spending the year recording his debut album. The resulting Only When We're Naked appeared in July 2017. ~ Rich Wilson, Rovi