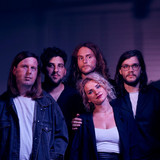 Multimagic is an Ohio-based indie pop band founded by singer-songwriter Coran Stetter. The band caught an early break when a demo of their song "Let Go" gained traction, garnering a devoted fanbase in their hometown of Cincinnati and appearances at music festivals SXSW, CMJ, MPMF & Bunbury. However, in February of 2017, Stetter suffered from a misdiagnosis & was overprescribed prednisone & codeine, which led to a period that the young songwriter describes as a "manic daze" that changed the course of his life. During his recovery, many of Stetter's friends & former bandmates had left him to fend for himself, so he spent the next year rebuilding relationships & fostering new ones. Multimagic now comprises guitarist James Ruehlman, drummer Evan Brown, keyboardist Meg Kecskes & bassist Anthony Maley. Reconnecting with music was an important part of Stetter's recovery & his bout with mental illness and search for redemption became themes of the band’s debut record, Manic Daze. The album was released exclusively on vinyl April 4th, 2020 via Soul Step Records & sold out within its first week. Influential Vinyl reviewer Vinyl Exams claims Manic Daze is "...in my running Top 3 list of best albums of 2020, major/indie/whatever. I am absolutely stunned with how much I love this album & it’s one of the first times I’ve listened to a submission three times in a row after dropping the needle the first time." Save "Manic Daze" here: https://sym.ffm.to/manicdaze_multimagic