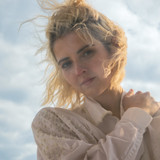 Born in Scotland and raised in Warwickshire, her musical journey has seen her soar through the ranks at BBC Introducing, and progress to writing and recording at Abbey Road Studios while finishing her A Levels, where she eventually ended up working as a receptionist. Emily Burns introduced the world to her poppy musical blueprint via the smart-mouthed single ‘Take It Or Leave It’ in 2016. Burns very quickly developed her own musical perspective and mission statement—songs which had to be honest, accessible, and have the potential to connect to absolutely anyone. In 2020 she shared her most recent EP I Love You, You’re The Worst which included vivacious pop anthems ‘Terrified’ and ‘Hello’. Followed by releasing a new version of her heart-breaking hit single from her acclaimed EP My Town, “Is It Just Me?” in 2021 featuring JP Cooper. With her honest, captivating, switched on pop, Emily Burns is undeniably one of the brightest new song writing talents, destined only for big things.