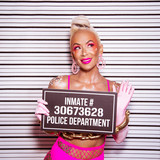 “Picture P!nk meets Kehlani, with powerful lyrics, a voice that can move mountains. In her music, she promotes honesty and trust.” - Soundigest Anthemic Pop music, dynamic vocals, and compelling lyrics with an R&B flare,

TAHNE’s music invokes change and asks tough questions. Tahne Jo Stillwell, an American singer-songwriter, was born in Wisconsin and at a young age found herself in foster care and the juvenile system. Through these trials, she cherished music as her empowering and reliable companion and has recognized the power that music possesses. Prior to moving to Nashville in the Summer of 2018, TAHNE collaborated with and was mentored by Paul Worley (Lady A, Dixie Chicks), David Hodges (Evanescence, Carrie Underwood), Sean Garrett (Beyoncé, Fergie), and others. She is presently working with Grammy Award-winning producer-songwriter Shannon Sanders (John Legend, India Arie) and will be releasing more singles that they have collaborated on