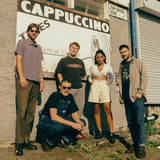 A collective made up of songwriters, producers, sound engineers and session musicians, Eades, more than most, have grappled to reconcile the importance of community against a burning need to go it alone. Self-proclaimed as “David Byrne and Lou Reed’s dyslexic child playing out of a Motorola Pebl” the juxtaposition serves to fit. Like New York Bowery clubrats misreading the instruction manual for British post-punk, their sound is assembled somewhere within the shifting textures of rhythmic convulsions and low-fidelity rawness. Having four songwriters and two producers at their disposal, it’s little surprise that the band pack a pluralistic punch of new wave, art-punk, noise-rock, garage rock and 90s alternative. Poised to disrupt a music scene often self-medicating on nostalgia, there’s a bright directness to their delivery. A nonplussed amphetamine groove. That rare alchemy of a group with heart, brains, and an ear for a hook. Perhaps some of this sharpness is derived from their DIY approach; all songs are cooked up in the band’s own subterranean Bam Bam Studios run by Harry and Dan. For a team based in Leeds, their production style bristles with all the frenetic bounce of New York life. Alive, fast-walking and zig-zagging through the crowds of downward-gazing multitaskers.