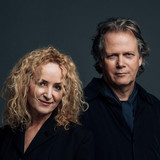 Secret Garden grew out of a chance meeting at the Eurovision Song Contest in Dublin in 1994. Fionnuala Sherry was a member of the RTE Concert Orchestra; Rolf Løvland was the conductor and co-writer of Norway’s 1985 Eurovision winner ‘La Det Swinge’ for Bobbysocks. Their new collaboration landed a record deal with Norwegian Polygram short time after. ‘Nocturne’ was selected as the next Norwegian entry for Eurovision and went on to win the 1995 contest. The 1995 debut album ‘Songs From A Secret Garden’, became a major hit and since then their music has spread to all corners of the world. Over two decades together, the Irish-Norwegian duo has sold millions of records and amassed a trophy cabinet containing 113 platinum discs. More than that, they have sound tracked the lives of listeners from Dublin to Denver and Bergen to Beijing. For Rolf and Fionnuala, the global appeal of Secret Garden, is that listeners from all backgrounds can understand their musical language. “I feel I can tell a story – beginning, middle and end – without words,” says Fionnuala. “Because of that we don’t have a language problem. “I think it’s an emotional thing,” adds Rolf. “And that’s the essence of all music.”