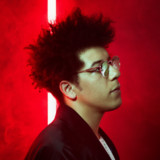 Yuman was born 23 years ago, from an Italian mother and a Cape Verdean father. He is the eldest of three siblings and his life, already quite challenging, had soon put him in front of a sudden growth. Yuman reacted using music as a shelter; a wunderkammer, a powerfull place of comfort kept hidden for a long time. He then decided to open this“room” and explore its contents, making of music his life. In 2015 he took a sabbatical from work and travelled around Europe: from London he moved to Berlin, where he could meet another artistic melting pot, which gave him the opportunity to jam with local musicians. Back to Rome he met the producer and owner of Leave Music, Alberto Quartana, who recognized at first sight his great talent and decided to produce him, intrusting Francesco Cataldo as artistic producer of the project. This immediate “professional fellowship” led them to work side by side and produce new songs sung by Yuman’s powerful voice. In 2017 Quartana proposed Yuman’s songs to Universal, which decided to sign a contract with the Artist. After months of hard work and effort “Twelve”, his first single, mixed by Chris Lord Alge, is released on November 9, 2018. The song suddenly got the attention of the media, national radios and at the top of some of the most followed Spotify playlists. This year begins with a mention of Yuman by Youtube Music among the 10 most promising artists of 2019 in the "The sound of 2019" ranking, and with the release of the second single "RUN".