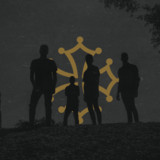 Areis (meaning “to raise” in ancient Occitan), is a band from Bagnols-sur-Cèze (France), in the Occitania region. Formed in 2019 by ex-members from Kombur and Right To The Void, the quartet takes inspiration in music genres such as hardcore, black metal, post-hardcore and punk which they've blended, using dark, occult and Occitanian-themed lyrics, into no nonsense, gloomy music. In 2020, the band signed a record deal with the label WormHoleDeath for a debut album to be released worldwide in 2021.