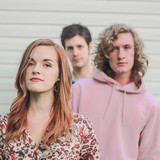 The Wonderful Nobodies (Seth Taylor, Lacy Green, and Aaron Williams) are a Nashville-based trio of singers, songwriters, and multi-instrumentalists hailing from the Appalachian region of Virginia and North Carolina. Individually, they've written hundreds of songs and have played on stages from the Grand Ole Opry to Carnegie Hall. However, it was a Friday night jam that made a band out of the long-time friends. In an attempt to capture that initial magic, they converted a room in their shared house to a studio. When Green brought in the beginnings of “Saviorville”, the band's sonic and lyrical identity began to take shape. TWN is about that gray area between the black and white. It's about being proud and humble. It’s about being a small town kid in a big city. Being scared, but brave at the same time. Those are the kinds of contradictions that the characters in their debut album A/B are facing. In an either/or world, they're trying to figure out how to be both.