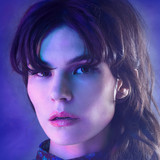 For every birth, a new name. A forename, in this instance, chosen by Olivia Merilahti to encompass the identity and nature of her solitary musical foray. A multidimensional pop album answering to the name and echos of an alter-ego from beyond: Prudence. After more than a decade of appearances as half of duo The Dø, Olivia first laid eyes upon her solo path at the end of their latest tour. Carried by a true love for pop in all its forms, with a will to embody the times, her debut album is grounded in multiple visual realms. Aided by a composite crew of collaborators, Prudence delivers her message through the space between herself and her creator. Nothing is impossible anymore, all it takes is a bit of conviction and courage - our heroine’s explicit mission. Woman, sister, mother, fourth star of the Cat’s Eyes, a modern Rachael from Blade Runner, the “Ghost in the Shell” in the mirror who at nightfall rises, offering her powers to the world. The power to wield science fiction in service of reality. The power to rise.