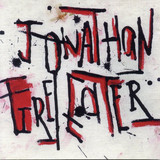 Jonathan Fire*Eater was the rare band whose members had the good fortune of growing up together -- and the band's music reflected its members' closeness. Their star burned incredibly bright for just a few years, finally burning out -- not fading away -- in 1998. The five-piece grew up in Washington, D.C., where they started playing music together at an early age. After high school, all five moved to New York City to attend college, where living together kicked the musical process into high gear. The band practiced in a boiler room at Columbia University. The band's self-titled debut album was released by a tiny indie label in 1995. Suffering from terrible production and a lack of cohesion, it didn't win the band many fans and quickly disappeared. Almost immediately, though, the band released the intense and brilliant Public Hanging of a Movie Star EP, which, along with their legendary early live shows, made Jonathan Fire*Eater the talk of the city. The sound was propelled by Walter Martin's Farfisa Fast Five organ, an instrument whose sound was a throwback but, in this band's hands, the perfect instrument. Guitarist Paul Maroon provided the spooky guitar noises; Tom Frank and Matt Barrick were an amazing rhythm section. Enigmatic singer and lyricist Stewart Lupton was really Jonathan Fire*Eater's star attraction, though. With a voice like a young Mick Jagger mixed with Nick Cave and a bizarre, fantastic stage presence, Lupton was what had people talking, A&R people in particular. The band was relentlessly pursued by major labels in 1996, and ended up as one of the first signings to the then-new Dreamworks SKG. They also released the excellent five-song Tremble Under Boomlights EP that year, largely regarded as their finest moment. Press hype and hyperbole surrounded Jonathan Fire*Eater's major-label debut, Wolf Songs for Lambs, but amidst all the excitement, someone forgot that the band's music, although amazing and memorable, was never really commercially viable. The album remains a brooding, mysterious affair with bursts of brilliance, but was even less pop-oriented than the two EPs that preceded it. Artistically a huge success but ultimately a commercial failure, Jonathan Fire*Eater broke up in 1998. Singer Stewart Lupton performed the occasional shambling live concert under the name Stewart Stephenson and then formed the Childballads, while the rest of the band continued to play together, first under the name Today Okay and then, after adding two former members of the Recoys (Peter Bauer and Hamilton Leithauser) as the Walkmen. Sadly, Stewart Lupton died in May 2018 at the age of 43. ~ Josh Modell, Rovi