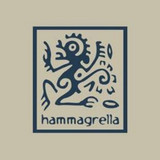 HAMMAGRELLA is a Swedish musical project initially created by songwriters Hans Kalderin and Patrik Cedemar in 1982. The first incarnation of the band played odd songs on primitive instruments. When Mats Sandin joined the band, they turned into a power pop live act called ONDEROX. They toured around Stockholm with quirky, catchy songs like “Bryta ut” and “Utan trams”. 1999, the second incarnation of the group. Kalderin and Cedemar reunited and reinvented Hammagrella as a home-studio project. Over the next six years tons of simple, lo-fi, most often unfinished, yet great songs were recorded and shared among fans on Internet Forums and places like MySpace and LastFM. The epic concept around small-town Grums was born and hits like “Ping-pong song”, “Riktig restaurang” and “Tyska barn” was introduced to the audience. The band was reactivated in 2016 with new home-studio recordings, which continued in the same style with “Radio Grella” and a new concept album around a lost LARP-gang, “Svegs Trälar”. In parallel, the third incarnation of Hammagrella was born. With Mats Sandin as the driving force together with Kalderin and some experienced musicians, they started a new modern live version of Hammagrella called HAMMAGRELLAS UNIVERSUM. Picking some favorite Hammagrella songs from the past combined with brand-new songs, they are currently recording a studio album with only analogue instruments that is planned to be released in 2018.