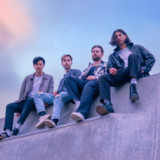 Joe & The Anchor - a flourishing Swedish pop band consisting of four childhood friends. With a distinct image and modern production, Joe & The Anchor delivers energetic guitar-driven pop, strong melodies and an original sound. The band members Joakim, Robin, Viktor and Ruben have been friends for the greater part of their lives. Five years ago the band started to play together as ’Joe & The Anchor’, often shortened to JATA - symbolising the dependability the band has towards each other, and more specifically a metaphor for the importance of a strong anchor on a boat. During their active years, JATA has been able to explore several different genres, perform around Sweden and perform as supporting act of Mando Diao - all shaping them into a strong live band with an original music style. What characterises the band is their drive, both producing the music and all visual material themselves.