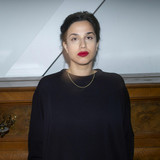 Istanbul born and raised, Berlin based electronic music composer and sound artist Hüma Utku explores the possibilities of how sound textures and rhythm can be used to evoke a sense of ancient within abstract electronic music. With her genre averse approach, she fuses field recordings, acoustic instruments, atmospheric ambience; into harmonious noise and harsh ritualistic rhythms as means to utilise sound and music as tools for storytelling. Utku's works draw inspiration from human condition, Jungian psychology, mysticism and folklore. In August 2018 Şeb-i Yelda (EP/12'') was released by Karlrecords, which presented Utku (as R.A.N.) with an evolved sound and strong theme to a wide audience. Following the international success of her EP, she released her debut full-length album under her own name Gnosis in July 2019 via the same label. Later in 2019, her rework of Vanessa Wagner's Struggle for Pleasure (originally by Wim Mertens) in company of selected artists like Wolfgang Voigt (aka GAS), Suzanne Ciani & Vladislav Delay, was released by the Paris based InFine music. Utku has been touring across Europe and the Middle east and her work has received notable press from platforms such as The Wire, Noisey, RollingStone, Groove Mag, Gonzo Circus and Scene Noise among others, as well as getting broadcasted by seminal radio station and platforms such as BBC Radio 3, NTS radio, RAI 3, Resonance FM, YLE and Sveriges Radio.