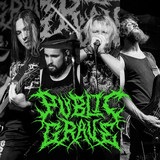 Founded in Fürstenfeldbruck (near Munich; Germany) in 2008, the members of Public Grave went from a group of friends, brought together by their favorite music genre, to the only slamming and grooving death metal band in town. In the past ten years Public Grave got in touch with many underground metal bands so that their connections lead them to several gigs all over south Germany. “Cadaverous Resurrection is a concept album about the current state of our society.” Korny states. “The social sickness makes us mad and we want to get rid of apple-polishers acting without thinking.” The lyrics contain the actions with which one wishes to cause harm to those who live with disturbing degradations of some fundamental values. Maggot Infested Limb Removal and Cranium Crush Fest show the anger even in their titles. By gross exaggeration Public Grave created an absurdly brutal album with apocalyptic scenarios and zombies symbolizing our current state of society. After releasing Exhumed Corpses Undead Forces, the first single of the album, fans and befriended musicians replied “Take me from behind by force, that song got balls!” and that they surpassed themselves again in devastating brutality. Public Grave consists of four musicians, all involved in songwriting. Korny plays the blood-thirsty bass and Chris body-slamming riffs on his guitar. Beni unleashes the ramming rhythms for Hamby’s demonic beast-like vocals. All together they create a devastating wall of sound one can’t escape.