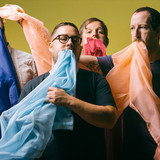 As a working-class foursome from Allentown, Pennsylvania, Pissed Jeans vent their frustrations through a bludgeoning, midtempo grunge punk sound focused on sexual depression and factory-town hopelessness, all doused in a heavy coat of sarcasm and apathy. On a sweltering August night in 2003, the Gatecrashers were driving between Los Angeles and San Francisco while rocking out to World Wrestling Federation: The Music, Vol. 2. During the peak of the sweaty singalong they realized they were onto something special and decided it would be fun to form a side project where they sang songs in the vein of the Whittingtons' "I'm Young, Dumb and Full of Cum," the idea being that everyone would swap instruments and create music for meatheads. Enveloped by the discomforting mood provided by the car's broken air conditioner, they reasoned that the vibe of the music should be like the oppressive heat inside the vehicle -- overwhelming and designed to drain the listener's energy. With influences ranging from early-'80s punk to '90s hardcore, the members of the Gatecrashers (Matt Korvette, Bradley Fry, Dave Rosenstrauss, and Tim) started penning songs for a demo under the name Unrequited Hard-On. Soon after, they changed their name to Pissed Jeans and recorded a second demo with the addition of a new song, "Night Minutes." After concocting a new batch of woeful anti-authoritative material, they released a 7" titled Throbbing Organ, and their first LP, Shallow, on Parts Unknown (later remastered and reissued by Sub Pop Records in 2014). Shallow branched off from the sounds of Flipper and Stick Men with Rayguns into sludgier and more droning territory. After the departure of drummer Tim, they recruited Sean McGuinness to take over, and the band signed to iconic grunge label Sub Pop. Despite their new status, the bandmembers kept their day jobs. Guitarist Fry continued working in account management, bassist Rosenstrauss converted cars to run on biodiesel, and frontman Korvette worked as a claims adjuster for an insurance company. The blue-collar way of life fueled the lyrical fire for a 7" released on June 6, 2006, called I Don't Need Smoke to Make Myself Disappear, an angry ditty about working in a restaurant and despising the patrons. The following year, Pissed Jeans released their second full-length, the heavy, plodding Hope for Men for Sub Pop, while remaining in their hometown. After touring and making a video for "I've Got You Ice Cream," the group returned with King of Jeans in 2009. A fourth album, Honeys, arrived in 2013. In 2017, the band returned with its fifth studio album, Why Love Now, offering a typically acerbic opinion on the mundane elements of everyday life. ~ Jason Lymangrover, Rovi