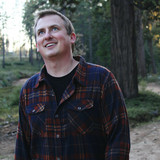 For years, Grover Anderson wrestled with his commitment to having a day job. Always eager to pursue a career as a singer-songwriter, the desire to start and support a family landed one all-important notch higher on life’s priority list. For the last seven years he’s been making both work—teaching high school English & drama, building a devout local following, and touring the US in the summer. He released four albums and played in 23 states, yet still he wondered if he’d given short shrift to a dream. Then 2020 happened, and as he witnessed the hardships endured by career performers, Grover had never felt more fortunate to hold a secondary gig. Grover lives in Murphys, CA with his wife Katie (also a high school teacher) and their two daughters. His songs have have found homes in 38k listener-made playlists. The variety of bands that he’s opened for (including America, Matt Stell, Birds of Chicago, Tristan Prettyman, and The Charlie Daniels Band) reflects the crossover appeal of his music, which folks have labelled folk, country, rock, and Americana. Grover doesn’t really care what folks call it as long as it moves them. Frequent collaborators include The Lampoliers, Jimbo Scott, members of Ghost Coach (formerly The Risky Biscuits), and Nate Nathan. Grover highly recommends fans of his music check out theirs—he enjoys it more than he loathes writing about himself in the third person.