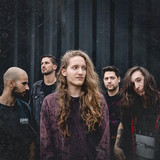 Like out of nowhere ANCHORAGE already counts to be a steady part of the Austrian heavy music scene. Post-hardcore wrapped in catchy melodies and brutal tones. That‘s the sound that catapulted the five guys from Vienna's underground to one of the most important major festivals in Europe. Within two years, they have been announced for Nova Rock Festival to perform at eye level with bands like Slipknot, Sum 41 or The Amity Affliction. Impericon spotted their potential and nominated ANCHORAGE for one of the most aspiring bands in Europe in 2019. And all that despite no record at hand! To cap off that amazing year, ANCHORAGE set up their very own ANCHORFEST and celebrated together with their fans at the sold out Arena Wien. With their debut EP ‘The Fifth Wall‘ they delivered a must-listen-to concept record for all lyric-lovers.

The well-known German SLAM Magazine praised the record with 9/10 points and Stormbringer Magazine declared it as „Post-Hardcore as its finest“. It remains exciting to observe if the heavy gunners from Vienna, as well as their former projects, make it to a major label or win the biggest national music award.