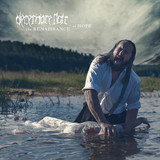 Founded in 2008 in Erfurt Germany as a side project of Sebastian Görlach and Daniel Bensch to focus on the sound of the Peaceville releases of the 90s. In 2010 the band slowly formed into a band with permanent members and first concerts. After a few line-up changes the first studio album "A Discoraged Believer" was released in 2014 on FDA Records. Also under FDA Records the second album "The Forsaken Earth" was released in 2016. In 2018 the band changed to the record company Lifeforce Records and released their third album "Autumn Kings". During this time Décembre Noir developed their own distinctive sound. A sea of emotions, plaintive leads, paired with catchy riffs and furious outbursts. An independent and modern sound, which makes the band an integral part of the doom/death scene. On November 13th Décembre Noir will release their fourth studio album under Lifeforce Records called "the Renaissance of Hope". You can listen to the first single here on Spotify from September 18th. And we will inform you about the upcoming concert dates. Follow us further on: https://www.facebook.com/DecembreNoir https://www.instagram.com/decembrenoir_official/?hl=de https://decembre-noir.de/ And find videos on YouTube: https://www.youtube.com/watch?v=_yUOUAGLqn0 https://www.youtube.com/watch?v=DeIQ16uCvOE https://www.youtube.com/watch?v=-eyOoqTvoO8 https://www.youtube.com/watch?v=7TiajRgO-DE