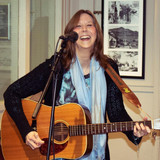 From the stage of the Grande Ole Opry, to remote villages of Samburu, Kenya, Connie has traveled the globe, sharing her music at fairs, festivals, concerts, cafe’s, arenas & graced global airwaves via film, radio & TV productions. While singing & songwriting were passions that drove Connie to excellence on her successful sophomore album, I Wish You Well, known then to fans as Connie Blackwood, shortly after release, surgery left her without a singing voice.

But this devastating blow would not crush her spirit, nor have the last word. In the years that passed, she began the arduous process of reclaiming her voice, now a bit deeper, a little raspier, surprisingly “Sufficient,” unveiling hope & encouragement in hauntingly beautiful melodies, hard for the soul to ignore. As an awarded Singer/Songwriter, a few of Connie's credits include, One Life to Live, Melrose Place, Young & the Restless, and Frodo Fare Thee Well, a co-write w/Ennis Pruitt, was considered for Lord of the Rings 3! Her latest album, Rough Cuts from the Castle has been described by fans as a "fanciful journey" featuring her "distinct vocals and deft guitar playing."