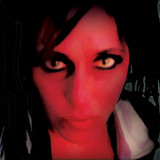 Fantasizer is a cyber band/performance art experience out of Los Angeles brought to you by Chorbus (drums, programming), Daramulin Shrine (music/lyrics) and a revolving cast of otherworldly musicians to complete the sonic soundscape. Currently in the studio recording two new EP's. Coming soon to a monitor near you. Stay tuned...and BE your FANTASY. Cast of characters: Daramulin Shrine: Queen of the World Between. The Spreader of Truth. Catalyst for your UnderWorld journey.

Forcing confrontation with your demons, she informs you of your hidden baggage. A prophetic Creative Force; all the elements combined & combustible. Earth explodes and dirt crumbles under her feet. Chorbus: Chemist with a broken heart. Stigmatized by adults and chastised by neighborhood children, labeled as crazy, unsafe and mentally ill, when it is really a broken heart from which he suffers. Laments the death of his beloved and his child, who were killed in a lab experiment that he designed and carried out. Visiting their grave every evening at sundown, he is the Living Dead, walking in the shadows between two worlds.