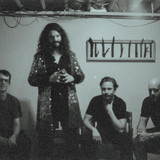 Way back in early 2013, the quartet loudly announced its presence with LAW, a 10-song introduction rife with blistering, no-nonsense rock and roll stacked atop the coarse sneer of then-singer Sean Williamson. After three years and one sizable substitution, Hot Coffin is back, better, and more brutal than ever with its self-titled follow-up, and first release with new singer Chris Chuzles (ex-Disguised As Birds) at the helm. From the opening salvo of “Whistle, Hawk &amp; Spit” to the driving conclusion of up-tempo album-ender “Ass To Ass,” Chuzles’ menacing rasp coalesces with pummeling percussion and angular, atmospheric guitar—both provided by a backing cast that boasts current and former members of Since By Man, Red Knife Lottery and Whips — to forge eight earnest, gimmick-free rock songs you’ll pine to hear live… with ear plugs in.