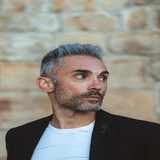 Joseph Cesar is a portuguese-born singer-songwriter living in Paris. He is also a teacher. He was born in Portugal but his life has been shared between Portugal and France since the age of 14. He has been interested in music since his childhood. He learned to play guitar on his own at age of 15 and listened mainly to alternative rock, grunge and punk rock during his high school years. He grew up in an english and american musical culture. In 2006 he

began to create the first texts and the first melodies in english. He released his first self-produced acoustic EP in 2013 entitled "Break Up The Walls". A year later, in 2014 he met his producer Lionel Renault with whom he will record his first album "The Other Side", officially released in October 2016 .