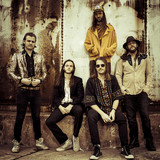 Floor It!!! is the new and second full-length effort from The Texas Gentlemen which includes everything from woozy, brass-fueled Dixieland-style jazz (“Veal Cutlass”), to slinky, chicken-scratch country funk (“Bare Maximum”) to lushly orchestrated pop-soul balladry (“Ain’t Nothin’ New”)—and that’s all in just the first 10 minutes of playtime. This Texas quintets' members are, co-singers and frontmen Nik Lee

and Daniel Creamer (who also handle guitar and keys, respectively); guitarist Ryan Ake; bassist Scott Edgar Lee, Jr.; and drummer Aaron Haynes (who since has been replaced by Paul Grass)—have spent the last half-decade on stages and in studios behind a wide array of artists, from legends including Kris Kristofferson, George Strait and Joe Ely to young whippersnappers like Leon Bridges and Shakey Graves. Floor It!!! follows the Texas Gentlemen’s 2018 debut, TX Jelly; but where that first record, cut in four days start to finish at Muscle Shoals’ iconic FAME Studios, was very much a snapshot of a quick moment in time, the new effort is a decidedly more composed and crafted affair. “The vibe of the first one was, ‘Let's just do this thing!’ ” Creamer says. “But this time it was like, ‘We have this idea about what we want to accomplish…’ ”